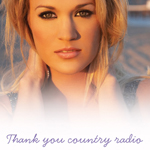 "Thank you country radio for 10 #1 singles in a row. In my wildest dreams I never thought this would happen," reads a full-page ad published in the May 11 issue of Country Aircheck, a country music trade publication. "I have you to thank."

To date, 192 lawmakers have expressed opposition to an effort engineered by the Recording Industry Association of America that would levy a new fee on America's local radio stations for music aired free to listeners. Fifty percent of the new fee would go directly to the record label companies, three out of four of which reside outside the United States.

The bipartisan House resolution now has 192 cosponsors, including: