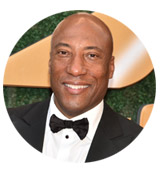 LLC/Entertainment Studios, will lead a conversation focused on his career and journey as an industry leader at the 2020 Radio Show, it was announced today. Produced by the National Association of Broadcasters (NAB) and Radio Advertising Bureau (RAB), the 2020 Radio Show digital experience is a week-long online event, taking place October 5 - 9, 2020.

Press registration is available at RadioShowWeb.com.