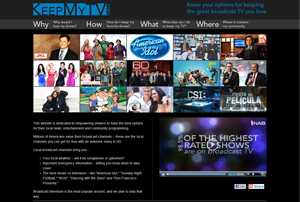 The website's launch comes as pay-TV providers continue to seek legislative and regulatory action that would give their companies increased leverage during retransmission consent negotiations. Retransmission consent, established as part of the 1992 Cable Act, is the market-based negotiation process in which a pay-TV provider and a local television station reach a carriage agreement for the TV station signal.

The new website notes that 98.5% of the highest rated television shows air on broadcast TV, and asks viewers, "What if your pay TV company no longer carried your favorite broadcast channels?" Keepmytv.org also notes the important local programming depended upon by millions of viewers, including local news and critical weather information programming that often serves as a lifeline during times of crisis.

The website provides resources for viewers, including instructions for purchasing a broadcast antenna, which allows viewers to receive free broadcast programming, available in many areas in high-definition format. "All stations are now broadcasting in digital, which means the snowy picture of yesteryear is long gone," the website explains.