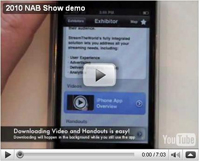 MyNABShow Mobile, the official NAB Show smartphone application, will provide users with unique features that include interactive exhibit floor maps, social media interaction, and the ability to download exhibitor brochures. The mobile app, powered by Core-apps' Follow Me service, is sponsored by StreamTheWorld and available free of charge for all smartphone users attending the NAB Show, April 10-15 in Las Vegas.

MyNABShow Mobile will allow users to build and import their show schedule directly, providing attendees with a personalized lineup of sessions and events. The app also provides a listing of all of the NAB Show speakers and exhibitors. Apple iPhone users will have access to an interactive exhibit floor map, making it easy to identify their location and find exhibiting companies in their vicinity. The mobile app is available for the Apple iPhone, iPod Touch and Blackberry. Other smartphone users will have access to a free, mobile Web-based application.

More information, including an online video demonstration of the app is available at NABShow.com/mobile. The app can be downloaded from the NAB Show's mobile Web site, m.NABShow.com.