WASHINGTON -- Representatives from four Washington, DC radio and television stations gave a presentation to members of the Federal Communications Commission's Communications Security, Reliability, and Interoperability Council today. The briefing highlighted the efforts initiated by local broadcast stations in the Washington, DC area during the February 2010 blizzard.

"For viewers, NBC4 and other local stations were the eyes and ears during the blizzards. We served as the pipeline for those calling the shots for public safety and first responders to get up-to-the-minute critical information out to residents," WRC-TV's Jim Handly told the council. "Viewership was enormous. It was a captive audience, hungry for the latest information and live pictures. For most, the local broadcast stations were their first and only source for immediate information from emergency declarations to safety tips." 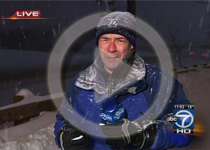 "WTOP broadcast live emergency information 24-7," WTOP-FM's Mike Moss explained, noting the radio station dropped $140,000 worth of commercials and spent more than $50,000 in additional newsroom costs. "But this is nothing new to WTOP. We made the same commercial sacrifices to provide breaking coverage of Hurricane Isabel and its legacy power outages, the attacks of 9-11 and the frightening sniper and anthrax scares that chilled Washington. For well over 100,000 people who lost their power in the storm, WTOP was a lifeline. That's not what I say. That's what they told us."