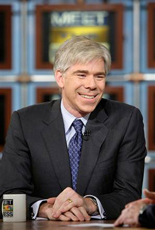 WASHINGTON -- David Gregory, moderator of NBC News' "Meet the Press," will keynote the 2010 NAB State Leadership Conference, NAB announced today. Held March 1-3 at the Hyatt Regency Washington on Capitol Hill, the event will bring hundreds of radio and television broadcasters to Washington to meet with lawmakers and federal officials on legislative and regulatory issues impacting broadcasters.

Named one of Washington's 50 most influential journalists by Washingtonian magazine, Gregory has covered numerous media milestones over the years, including the O.J. Simpson trials, the trial of Oklahoma City bomber Timothy McVeigh and the death of Pope John Paul II. In addition to moderating "Meet the Press," Gregory is a regular contributor to NBC's "Today" and a contributor and analyst on MSNBC.

Gregory previously served as NBC White House correspondent during the presidency of George W. Bush and has covered presidential campaigns in 2000, 2004 and 2008.

Previously, Gregory worked as a NBC News correspondent in Los Angeles and Chicago. He began his journalism career as a reporter for KGUN-TV Tucson before joining KCRA-TV in Sacramento.

Select events during the 2010 NAB State Leadership Conference, including Gregory's keynote address, will be open to members of the press.