Drawing on his expertise in computer technology, as well as his experience as a Broadway musical conductor, arranger and keyboard player, Pogue will offer attendees a unique perspective on the opportunities that today's evolving technology brings to the future of radio. Pogue's keynote address will be followed by remarks by NAB President and CEO David K. Rehr. 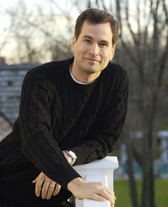 Pogue is currently the personal-technology columnist for the New York Times, and the author of their most popular blog, "Pogue's Posts." In addition to his New York Times "State of the Art" column, Pogue is a frequent guest on NPR's Morning Edition, and a technology correspondent on CBS News Sunday Morning, where his Google segment won the Business Emmy in 2004.

With over 3 million books in print, Pogue is considered one of the world's best-selling how-to authors. Macs for Dummies, one of seven books Pogue wrote or co-wrote in the "for Dummies" series, was the number one best-selling Macintosh book from 1992-1999, while PalmPilot: The Ultimate Guide has remained the number one best-selling Palm book since its release in 1998. In 1999, Pogue went on to launch a collection of humorous, informative booklets written for computer products that lack instruction manuals. Named the Missing Manuel series, these books now include over 60 titles covering a variety of computer systems and applications.

About the NAB Radio Show
The NAB Radio Show is the largest annual convention for radio. This year's show, Sep. 17- 19 in Austin, delivers a one-of-a-kind networking opportunity for station professionals representing all format and market sizes and is co-located with the R&R Convention. More information about The NAB Radio Show is available at www.nabradioshow.com.