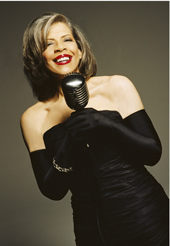 Austin has made 17 solo albums and crossed many musical genres during a career that spans over three decades. A mainstay on the Billboard Jazz Albums charts, Austin made her stage debut at the age of four when she appeared with godmother and musical legend Dinah Washington at the Apollo theater in Harlem. Throughout the 1970s Austin's voice was heard behind renowned artists and on countless jingles, earning her the title "queen" of the New York session scene. In the early 1980s she expanded her audience after participating on a series of albums with Quincy Jones, including his best-selling Stuff Like That and his Grammy-winning classic The Dude.

In addition to her collaboration with Jones, Austin teamed up with soul musician James Ingram to perform the classic duet and Grammy-nominated hit "Baby Come To Me," as well as the Oscar-nominated "How Do You Keep the Music Playing?" Also known as a performer, Austin appeared in her first featured acting role in Francis Ford Coppola's period piece Tucker: The Man and His Dream in 1988. That same year she released The Real Me, a collection of standards featuring her popular hits "Cry Me A River," "Smoke Gets In Your Eyes" and "Mood Indigo." In 1998 she released In and Out of Love, an album that spent nearly two years on the contemporary jazz charts. Austin continues to receive critical acclaim for her work, and recently won the 2008 Grammy for Best Jazz Vocal Performance for her latest album, Avant-Gershwin.

In addition to her work as a performer, songwriter and vocalist, Austin has participated in several major benefit concerts for AIDS-related organizations. She is a spokesperson for the American Heart Association's (AHA) "Power To End Stroke" campaign, as well as The National Coalition Against Domestic Violence (NCADV). Austin's "Grace of God," an inspirational piece written for the NCADV, will serve as the theme song for a national campaign to be launched later this summer by Going SOULo Inc.

As previously announced, this year's Celebration of Service to America Leadership Award will honor entertainment industry icon Quincy Jones. The Samaritan Award will be presented to 'Alabama' lead singer Randy Owen, who will accept the award on behalf of Country Cares for St. Jude Kids.

About Bonneville International Corp.
Founded in 1964, Bonneville Internationalâs heritage traces its early roots to KSL Radio, which first went on the air in July of 1922 (originally as KZN) in Salt Lake City and to KSL-TV, which had its on-air debut in 1949. Bonneville currently owns and operates 31 radio stations in the Chicago, Washington, D.C., Seattle, Phoenix, St. Louis, Cincinnati, and Salt Lake City markets, as well as KSL 5 Television (NBC affiliate) in Salt Lake City. The companyâs working motto is âDo good, do well, make a difference, and have fun,â and it structures its innovative and successful business model on the three principles of 1) building its people, 2) making a difference in its communities, and 3) meeting aggressive financial goals. Bonneville enjoys a long-standing reputation and is known industry-wide for its values-oriented programming and its nationally recognized and award-winning commitment to serving the communities where it broadcasts.

About NABEF
The NAB Education Foundation is a non-profit organization dedicated to serving the public interest in supporting and advocating: education and training programs, strategies to increase diversity, initiatives stressing the importance of the First Amendment, community service, philanthropy and timely broadcasting issues.