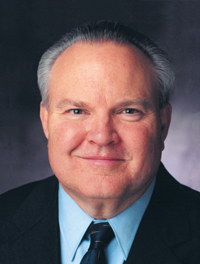 "Bruce Reese and Bonneville International serve as shining examples to all broadcasters that community service can be the bedrock upon which local stations can thrive in today's multi-channel, multi-platform world," said NAB President and CEO David K. Rehr. "Thanks to Bruce, the Bonneville commitment to 'do good, do well' has permeated the company's culture and resulted in a string of unblemished financial success. NAB salutes Bruce's service to NAB and to Radio, and we honor Bonneville's service to America."

Reese has served as chairman of both the NAB Radio Board and the NAB Joint Board of Directors. During his tenure as Joint Board Chairman, Reese helped establish NAB FASTROAD (Flexible Advanced Services for Television & Radio On All Devices), a technology advocacy program aimed at developing new technologies for broadcasters. As the immediate past joint board chairman, Reese also currently serves on the NAB Executive Committee.

In addition to his leadership at NAB, Reese has served on the board of directors for the Associated Press and Radio Advertising Bureau. He currently serves on the NAB Education Foundation's board of directors, where Bonneville is the charter sponsor for the Celebration of Service to America Awards, an event established by NABEF in 1999 recognizing broadcasters for outstanding service to their local communities.

For years, Reese has demonstrated his commitment to community service through his participation in a number of organizations, including the Salt Lake Area Chamber and Pioneer Theater Company. Within the medical community, Reese has worked with the Primary Children's Medical Center and the LDS Hospital Heart & Lung Institute Community, both of which are owned and operated by Intermountain Healthcare, where Reese has served on the board of trustees. Reese has served on the board of directors for United Way of Salt Lake, where he was recently honored with the 2008 Compassionate Leader of the Year Award, as well as the Brigham Young University Alumni Association, where he received his bachelorâs degree in 1973 and juris doctorate in 1976.

As president and CEO of Bonneville International Corporation, Reese oversees and operates 31 radio stations, as well as KSL-TV Salt Lake City. Prior to joining Bonneville, Reese practiced law in firms in Washington, D.C. and Denver.

About the NAB Radio Show
The NAB Radio Show is the largest annual convention for radio. This year's show, Sep. 17- 19 in Austin, delivers a one-of-a-kind networking opportunity for station professionals representing all format and market sizes and is co-located with the R&R Convention.