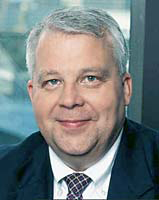 WASHINGTON, D.C. - Randy Michaels, executive vice president and CEO of Interactive and Broadcasting for Tribune Company, has been appointed to the NAB Television Board. Michaels, who was appointed by NAB Television Board Chairman Alan Frank, fills the "at large" seat left vacant when Board member Bob Lee of Schurz Communications retired last December.

Michaels joined Tribune in December 2007. Prior to taking the post at Tribune, he was the chief executive for Local TV LLC, a company created through his work with Oak Hill Capital Partners.