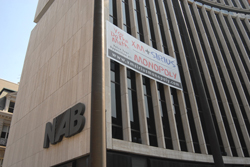 Click the above image to view a high-resolution photo.

WASHINGTON, DC – NAB has hung a banner from its headquarters in Washington in opposition to the proposed government-sanctioned monopoly of XM and Sirius Satellite Radio. The banner, which reads "Do the Math: XM + Sirius = Monopoly," directs citizens to www.xmsiriusmonopoly.com, where they can learn more about the proposed merger-to-monopoly of XM and Sirius and voice their opposition with the FCC.