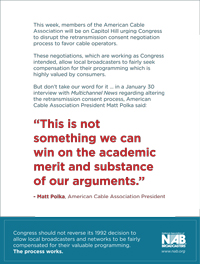 Separately, NAB today placed an advertisement in Communications Daily asserting that the retransmission consent process is working just as Congress intended. The ad quotes American Cable Association President Matthew Polka, who told Multichannel News in January, "This is not something we can win on the academic merit and substance of our arguments."

The BIAfn report can be read by clicking here. Highlights of the 10-page report, commissioned by the National Association of Broadcasters, include:

â¢ DBS service providers, as well as telephone companies entering into the video programming delivery business, recognize the value of local television stations and have successfully negotiated those retransmission agreements.

â¢ Cable system operators had previously demonstrated the value of these local television stations in prior retransmission negotiations by providing carriage of new cable networks created by broadcasters, such as ESPN2,FX,or local cable news channels.

â¢ The fact that several cable systems are conducting their negotiations through very public campaigns is a clear sign that cable systems place value on those local television stations, hoping outside pressure will lead to lower prices for carrying those stations.