WASHINGTON, DC â NAB Radio Board Member Mary Quass, president and CEO of NRG Media, testified on behalf of NAB today in a hearing before the Subcommittee on Antitrust, Competition Policy and Consumer Rights in the Senate Judiciary Committee. Below is a transcript of her oral testimony. 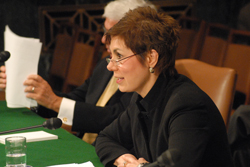 Good afternoon Chairman Kohl, Senator Hatch and members of the Subcommittee. My name is Mary Quass. I am the President and CEO of NRG Media, which owns and operates local AM and FM radio stations in Wisconsin, Iowa, Kansas, Illinois, Minnesota, Nebraska, and South Dakota. I am testifying today on behalf of the National Association of Broadcasters, where I serve as a member of the NAB Radio Board.

I am here to voice opposition to the proposed merger of this country's only two satellite radio companies, XM and Sirius.Satellite radio is a national radio service that provides hundreds of audio programming channels to listeners across the country. There are only two such services, and they compete against each other in the national marketplace. The undeniable fact is that XM and Sirius want government permission to take two competitive companies and turn them into a monopoly.

If this government-sanctioned monopoly is approved, consumers will be the losers as there will be no competition to restrain monopoly rates and power. Innovation and program diversity will suffer. Neither listeners nor advertisers will benefit. Let's remember that when the FCC allocated spectrum to Sirius and XM in 1997, it specifically ruled against a single monopoly provider. The Commission foresaw the dangers of a monopoly. It explicitly licensed more than one provider to ensure "intra-market" competition and to prohibit one satellite radio provider from ever acquiring control of the other. There is no reason to change now. XM and Sirius, by their own admission, are not failing companies. Their current highly leveraged position is due to extraordinary fees paid for marketing and on-air talent, including the $500 million contract that Sirius awarded to Howard Stern and the $83 million dollar bonus just last year. But even with these costs, XM and Sirius have made clear they can succeed without a merger.

Local radio stations can only broadcast within their FCC-defined coverage area. Local broadcasters' signals are not nationwide, and are not subscription. The national availability of satellite radio sets it apart from local broadcasters.

NRG Media operates in small and medium markets like Janesville, Wisconsin; Spirit Lake, Iowa; and Salina, Kansas. We understand that localism is our franchise and that we have a unique connection to the listeners that no other medium provides. We are the voice of the community in times of emergency, like the recent ice storms in Kansas and Iowa, and for many areas that are not served by local newspapers in airing community information and obituaries.

XM and Sirius, by contrast, offer a pre-packaged bundle of national, mobile digital audio channels. WSJY in Ft. Atkinson, Wisconsin delivers outstanding local news, sports and entertainment. Consumers, however, would never consider my station's local programming a comparable product to Sirius' 133 channels or XM's 170. A local radio station's programming is clearly not a substitute for the array of services offered by XM and Sirius. Services like XM and Sirius compete with each other - and no one else - in the national satellite radio market.

I can understand why they would want a monopoly, but that does not mean it is in the best interest of the public. Five years ago, the only two nationwide TV satellite licensees - Echo Star and DirecTV â proposed a merger that looked an awful lot like this one. They failed. Indeed, the Department of Justice filed a complaint to block the merger and the FCC decided unanimously that the merger was not in the public interest. An XM-Sirius merger is not either.

For these reasons and others, I respectfully ask you to urge regulators to just say "No" to this government-sanctioned monopoly.