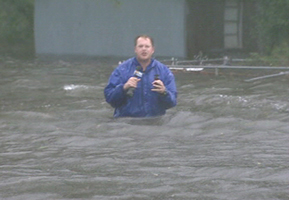 WASHINGTON, DC â The National Association of Broadcasters has won a 2006 Aegis Award for its video, "A Tribute to Gulf Coast Broadcasters," which was featured during the 2006 NAB Education Foundation Service to America Awards. The Aegis Awards are the video industry's premier competition for peer recognition of outstanding video productions and non-network TV commercials.

"Michael's video captured the essence of the critical life-saving role provided by local broadcasters along the Gulf Coast," said NAB President and CEO David K. Rehr. "Employees lost homes and waded through alligator-infested waters to keep their signal on the air and their communities informed. This video salutes these broadcasters for their heroic service and dedication in response to the worst natural disaster in our nation's history."

About NABEF
The NAB Education Foundation is a non-profit organization dedicated to serving the public interest in supporting and advocating: education and training programs, strategies to increase diversity, initiatives stressing the importance of the First Amendment, community service, philanthropy and other timely broadcasting issues.