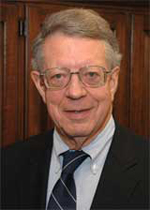 Schurz Communications, Inc. Chairman of the Board Franklin Schurz was honored with the Chuck Sherman Television Leadership Award at the NAB Small Market Television Exchange, held September 22-24, 2011, in Austin, Texas.

"Frank Schurz's dedication to quality journalism has earned the respect of broadcasters across the country who are committed to keeping their communities informed," said NAB Executive Vice President of Television Marcellus Alexander. "We are proud to recognize Frank for the positive impact he has made in the broadcast industry and in cities served by Schurz Communications."

Frank Schurz retired as chief executive officer of Schurz Communications in 2007 and remains chairman of the board. He is past president of WDBJ Television, Inc. Roanoke, Virginia; WAGT Television, Inc. Augusta, Georgia; KY3, Inc. Springfield, Missouri; and WASK, Inc. Lafayette, Indiana. He has been an Honorary Trustee of the American Women in Radio and Television Foundation, and also served on the boards for C-Span and MSTV.

Schurz, a recipient of the Presidential Award of Merit from the National Newspaper Association, was editor and publisher of the South Bend Tribune in Indiana, as well as the Morning Herald and Daily Mail in Hagerstown, Maryland. During his 26-year newspaper career, he served as president of multiple press associations and organizations, including the Maryland-Delaware-D.C. Press Association, and the Institute of Newspaper Controllers and Finance Officers, and also served on the board of the Inland Press Association. A member of the American Society of Newspaper Editors, the Society of Professional Journalists and the National Press Club, Schurz also chaired the AP audit committee and committees of the American Newspaper Publishers Association.