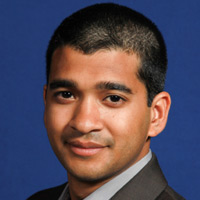 Zamir Ahmed is vice president of Communications for NAB, where he helps shape NAB’s messaging on public policy advocacy related to legislative, regulatory and legal issues affecting America’s radio and television broadcasters. He joined NAB in February 2011 as manager of Media Relations.

Zamir previously served as deputy press secretary for the House Committee on Small Business in 2009-2010. He began his career in Washington as an intern in the office of Sen. Dianne Feinstein (CA) in 2008. He holds a B.A. in English from Middlebury College.