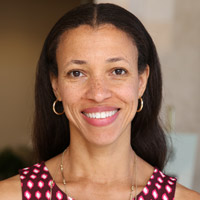 Shermaze Ingram is senior vice president of Marketing and Events and is responsible for developing and executing strategies to enhance the brand of the National Association of Broadcasters, its programs and television and radio broadcasters. In this role, she also oversees marketing campaigns for numerous NAB events, the Radio Show, member benefits and professional development programs.

Shermaze has an extensive background in media relations, including more than 10 years of experience as a print and broadcast journalist. She began her career in New York at Consumer Reports magazine, where she was awarded a writing fellowship and was later promoted to editor.

She then worked as economics and national affairs reporter for the award-winning PBS program, “The NewsHour with Jim Lehrer.” Shermaze also served as communications manager for “The NewsHour” and MacNeil/Lehrer Productions (MLP), and managed publicity for a series of prime-time PBS specials, including live coverage of the 2004 political conventions and presidential election.