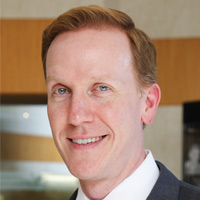 Patrick McFadden is associate general counsel at the National Association of Broadcasters. In this role, he helps develop and advance advocacy positions for NAB in the areas of spectrum policy and innovation.

Prior to joining NAB in 2013, Patrick was an associate in the Washington office of Drinker Biddle & Reath LLP, where he practiced telecommunications law. His practice included policy advocacy, litigation, regulatory compliance and negotiations for wireless, wireline and VoIP service providers and communications device manufacturers. Patrick also worked as a broadcast legal assistant and as a licensing analyst for a wireless telecommunications carrier.

Patrick earned his Juris Doctor from the George Washington University Law School and his undergraduate degree from Georgetown University. He lives in Arlington, Va., with his wife and two dogs.