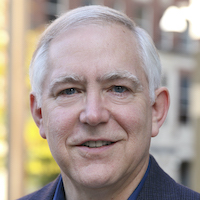 Lynn Claudy is senior vice president, Technology for the National Association of Broadcasters. He joined NAB in 1988 as a staff engineer and held positions of director of advanced engineering and technology and vice president before assuming his present position in 1995. Prior to joining NAB, Lynn was employed by Hoppmann Corporation, a communications systems integration firm for corporate and government clients where he held a variety of technical and management positions, as well as a part-time Professor of Physics at American University. Previous to that, he was a development engineer at Shure Brothers Inc., a manufacturer of professional and consumer audio equipment.

In addition to his role representing the technical interests of NAB’s radio and television members in standards organizations and other forums, Lynn is a member of the FCC Technological Advisory Council (TAC), the FCC Communications Security, Reliability and Interoperability Council (CSRIC), the Society of Motion Picture and Television Engineers (SMPTE), the Institute of Electrical and Electronics Engineers (IEEE), the Society of Broadcast Engineers (SBE), the Audio Engineering Society (AES) and the Association of Federal Communications Consulting Engineers (AFCCE). Lynn has a B.A. degree in music from Oberlin College, a B.S. degree in electrical engineering from Washington University in St. Louis, and a Master of Science degree in electrical engineering from the Illinois Institute of Technology.