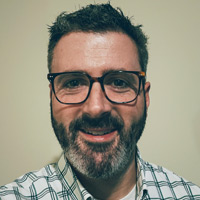 Jonathan Toomey is a content, production and marketing executive with over 15 years of experience across the television, conferences, trade show and nonprofit ecosystems.

He currently serves as vice president, Content Development at NAB in Global Connections and Events, where he oversees the strategic design, development and execution of all conference educational and digital content in support of NAB's convention and business development programs, NAB Show, NAB Show New York, NAB Amplify and CineEmerge. This is his second stint at NAB—he also served in the same role from 2015 to 2016.

He was previously chief marketing officer and a conference producer for Eventful Conferences, a division of ASUG, the Americas’ SAP Users’ Group. Prior to that, he spent nearly a decade in New York City on the production teams for multiple NYC-based talk shows, as a broadcast operations supervisor and copywriter at Showtime Networks and a TV critic for AOL’s now defunct TV Squad blog.

A graduate of Syracuse University’s Newhouse School with a double B.A. in television/radio/film and economics, he currently resides in Syracuse, N.Y., while attempting to keep up with his two sons, George and Patrick.