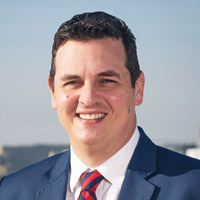 Jack Smedile is the Senior Vice President of Government Relations at NAB, where he helps to shape and lead NAB’s efforts on Capitol Hill, working to educated Members of Congress and Congressional staff on the issues the broadcast industry faces. In addition to his lobbying role, Jack also oversees the NAB’s Political Action Committee, NABPAC, which gathers voluntary contributions from NAB members and identifies and supports pro-broadcast Members of Congress.

Jack joined the National Association of Broadcasters in November 2013 as vice president of Government Relations and has been part of the NAB’s successful efforts to pass STELAR, provide full reimbursement to broadcasters impacted by the spectrum repack and to continue to fend off all attempts to impose a performance royalty on FM and AM radio stations.

Prior to joining NAB, Jack worked in the U.S. House of Representatives and Senate for over nine years. He started his tenure on Capitol Hill as a staff assistant for House Majority Whip Roy Blunt (MO-07). He then spent four years working for Congressman Kenny Hulshof (MO-09), where he oversaw telecommunications, transportation and tax issues, first as a Legislative Assistant and later as his Legislative Director. He later returned to work for Congressman Blunt and handled parts of his Energy and Commerce Committee portfolio before accompanying his boss to the Senate when he was elected in 2010. Jack worked as a member of the Commerce Committee Professional Staff for Senator Blunt, handling telecommunications and transportation issues before joining the NAB.

Jack graduated from Saint Louis University and currently resides in Washington D.C., with his wife and two kids.